Technical Manual 10-751 is published for the information and guidance of all concerned.

By order of the Secretary of the Army:

Department of the Army • December 1949

The purpose of this manual is to provide sufficient fundamental information to enable experienced pianists and pipe organists to adapt their knowledge and technique to the operation of the electronic organ, AN/TNP-1. The instructions in this manual are not intended to teach organ technique or to guide inexperienced personnel. They are based upon the assumption that personnel who are planning to use the electronic organ have a fundamental musical understanding, a general knowledge of simple musical terms, such as those defined in appendix I, and ability to perform skillfully on piano, pipe organ, or other similar keyboard instrument.

This manual contains descriptions of major components of the electronic organ and information on its operation. It includes certain maintenance responsibilities of operating personnel, but does not include repair or maintenance procedures beyond the scope of the using organization.

The complete electronic organ, AN/TNP-1, is a self-contained, electro mechanical, sound-producing unit designed for operation on 120-volt, 60-cycle alternating current, or 120-volt, 50-cycle alternating current, as indicated on name plate, (see fig. 1). It makes use of the physical characteristics of sound to build musical tones from fundamental sounds that are electrically produced. The complete organ, consisting of a console, a tone cabinet and auxiliary equipment, is a movable unit which fits into a space approximately 4 feet square.

The console is a wooden cabinet similar in size and shape to the conventional pipe organ console. It contains the equipment required to select, generate, control, and partly amplify musical tones.

Hand Controls. The console has a slanting cover at the front that folds back upon the console top to reveal all hand controls used by the organist to produce music. Hand controls consist of manuals, drawbars, various switches and other control devices (see fig. 2) 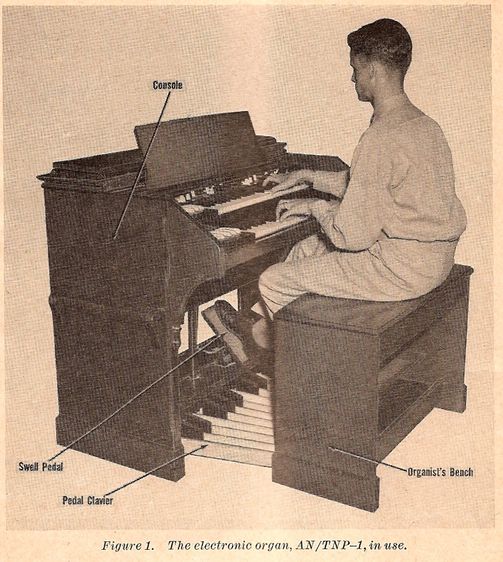 (1) Pedal clavier. The pedal clavier is an assembly of 25 wooden pedals housed in a wooden framework. It sits at floor level in front of the wooden console cabinet. Pedals are provided in two designs and are colored in conventional organ fashion with 10 pedals having short black elevated foot contacts indented in the usual pattern between 15 flat-topped, light-colored pedals. Each pedal has a flexible metal strip fastened to its console end. When the organ is assembled, these pedal end strips slip into the base of the console cabinet. When pedals are pressed down, the end strips activate the electronic equipment required to transmit the pedal tones.

(2) Swell pedal. The swell pedal is located near the center of the base shelf of the console. It consists of a rubber-padded footpiece connected with the interior of the organ by means of a crankshaft and rod assembly. When the toe of the footpiece is pushed, the organ volume is increased; when the heel is pushed, the volume is decreased.

(2) Electronic. The electronic components consist of tone generating units concealed with the drive assembly in the tone generator housing, a tremolant switch to produce a tremolo effect in the organ tone, a transformer and various other equipment for amplifying or producing organ tones. 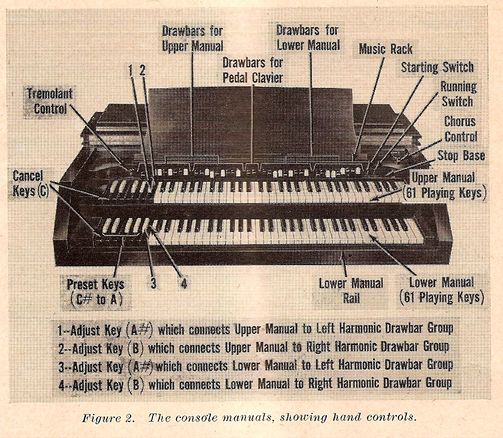 Organizational maintenance, or routine preventive care and adjustment of the electronic organ will be performed by the organist or the using organization. Other maintenance should be referred through proper channels.

It is the responsibility of every organist to keep the instrument he uses in the best possible condition. This entails frequent inspection, followed when necessary by reports of defective or unserviceable items. Reports should be made through channels, as indicated in paragraph 20. Equipment also must be protected against avoidable damage by keeping it clean and well lubricated. 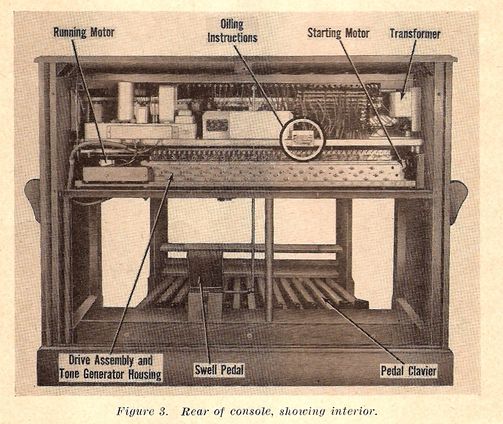 *Lubricant RL will ignite at 175° F. For this reason observe proper precautions to avoid overheating when handling or storing.

CONSOLE. By flowing along numerous fabric wicks, oil is supplied to the motors as well as other moving organ parts from centralized troughs. Oil troughs are supplied from four oil cups. The location of these oil cups is given on the oiling instruction plate (see fig. 3). Lubricate the console every 90 days in the following manner: APPROVED LUBRICANTS. Lubricating materials required for servicing the electronic organ, AN/TNP-1 (see SB 38-5-3), consist of the following: PEDAL CLAVIER. To clean the pedal clavier, remove it from its position in front of the console. Proceed in the following manner: KEY CONTACTS. If a key has become silent as a result of dust accumulation on the key contacts: strike it 15 or 20 times in a rapid staccato manner. If this does not dislodge dust particles and clear the contacts, report the difficulty through the proper channels. GENERAL. Clean all wooden parts and playing keys with clean lint-free cloth (cheesecloth). IN OVERSEA AREAS. Maintenance of the electronic organ in oversea installations will be accomplished as directed by appropriate commanders. IN ZONE OF INTERIOR. Mechanical and Electronic Components. The mechanical and electronic components of the organ console are accessible after the removal of a wooden panel at the rear of the console (see fig. 3). Foot Controls. The foot controls, located within easy reach of the organist's feet, include a pedal clavier and a swell pedal. The 61 playing keys are colored in conventional piano or organ fashion, having 25 short black keys indented in the usual pattern between 36 longer white keys. Contacts required to produce musical tones are made by pressing lightly on the-playing keys.